from her new cd "Awakening"


4 Years after we all discovered Jackie Evancho and her amazing talent, she is still as charming, gracious and sweet as she was then. And of course, as talented.

This the recent interview on BT Calgary she did along with her early mentor & friend, David Foster.

She also performs here, her song, Your Love, from her brand new CD, Awakening, which has just been released a few days ago and her fans are as much in love with as her first CD's, Songs From The Silver Screen, Dream With Me, Heavenly Christmas, O Holy Night, and Prelude to a Dream 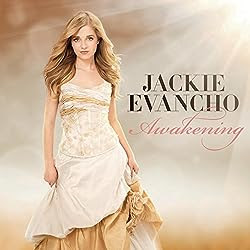 Posted by Unknown at 2:05 PM No comments: 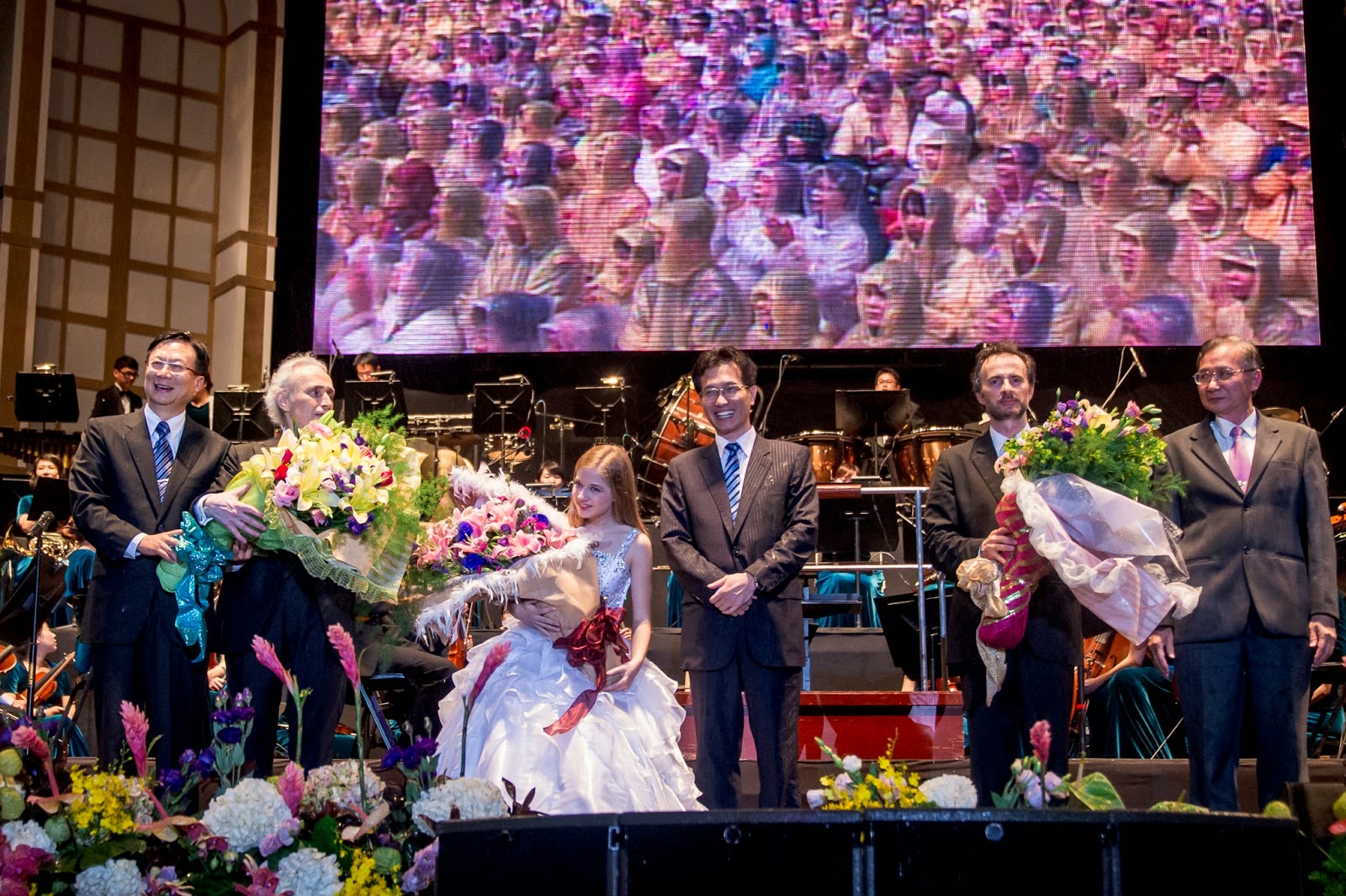 How cute is THIS?
Jackie with the huge bunch of flowers she was given after her performance with Tony Bennett. She looks like she needs help just holding that heavy-weight! It's almost bigger than she is! Just like her talent, oversized and beautiful. 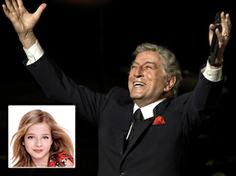 Legendary crooner Tony Bennett, along with 13 year old singing sensation Jackie Evancho, made a stop in Atlanta, Georgia, at the Verizon Wireless Amphitheatre. Opening the show, Evancho stunned the audience with the powerhouse voice that has taken the music world by storm. Sounding more like a long-seasoned veteran of the Broadway and opera stages,Evancho regaled the crowd with selections from musicals and more.

When Tony Bennett took the stage, the crowd gave its first of many standing ovations. Performing songs from his 60+ years on stage,, interspersed with favorite stories of that long and storied career, Bennett wowed the audience with his still-powerful vocal abilities despite his 86 years of age. It was a night of fond memories and wonderful music as the consummate performer led the crowd on the musical journey of his life.
Post courtesy of www.musicnewsnashville.com
Posted by Unknown at 10:41 AM No comments: 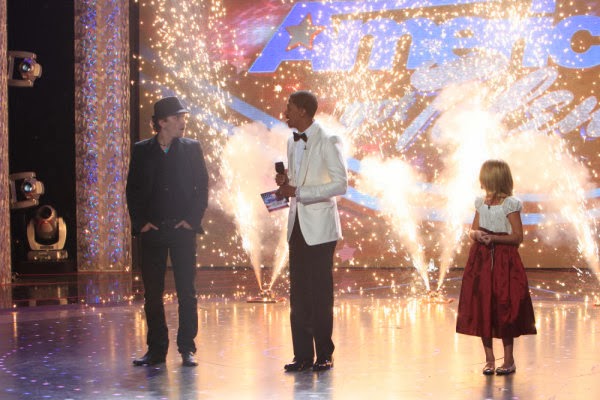 THAAAT moment....that shocked the world; even the winner, Michael Grimm.

Apparently there was a good reason for Jackie not getting the 1st place win (as told by someone close to the Evancho family) and it had nothing to do with not getting the most votes.

She DID get the most votes, but her parents had made a deal with AGT to not award her the 1st place as that would tie her contractually to AGT for a year and would require her to do 25 obligatory promotional tour performances for them. Her parents didn't want that and AGT agreed with them and let her off the hook. Jackie knew nothing of this arrangement until after the great disappointment. Poor girl.

Still, it was done to allow her to immediately get her career off the ground as it was clear she was going to be a mega-star and it would have been unfair and frustrating to have held her back for a year. So she was awarded the 2nd place, and tried her best to stay professional and kind about this great loss, but, unbeknownst to her at that moment, it was the best thing that could have happened to her. It set her free to live her dream. She had to do only 10 promotional performances for AGT and was free to sign a recording contract with whomever she (her parents) chose.

She didn't get the momentary glory, but she got what she had wished for and dreamed about all of her 10 years; she got to perform her wonderful talent to the world at large, be a celebrity & walk the red carpet. This was what she'd said her dream was. She got it. Lucky for us! 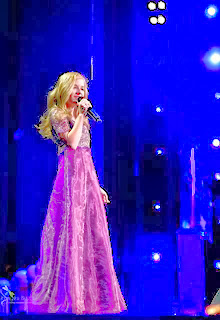 Now, at the ripe old age of 13 and a half, she is a seasoned pro, living her dream, experiencing many more plusses as a result of her resounding success, and we get to hear as much of her outstanding talent as we wish to.

THAT moment must have seemed like a nightmare to Jackie; it certainly did to many of us, already smitten with this adorable little golden girl with her angelic personality, oodles of charm and magnificent voice, but, it was a blessing in disguise for her. Yes she suffered through the heart-breaking disappointment of THAT moment, but she's a strong girl and she survived it; charm, tact and kind-hearted personality intact. 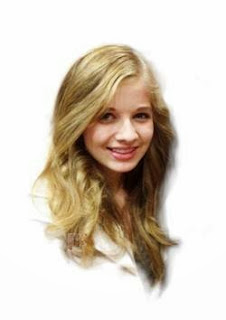 Our cute little golden haired girl is now, three and a half years after THAAAAT moment, very much a winner, and a beautiful golden haired teenager with the world at her feet, and deservedly so, and we get to enjoy many more winning moments of wonderful musical magic with young miss Jackie Evancho. 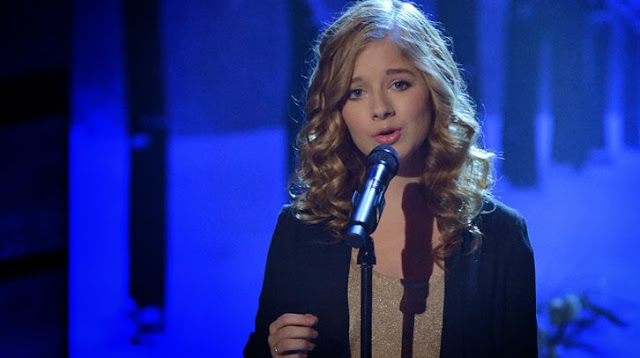 The then 10 Year old Jackie Evancho, wishing everyone a 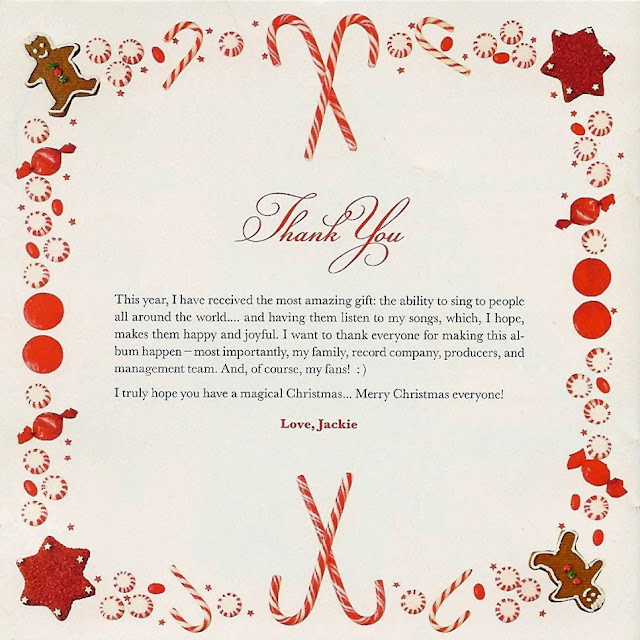 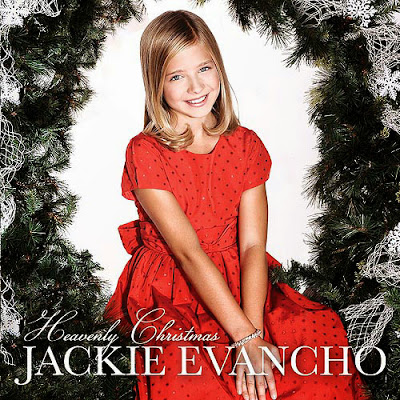 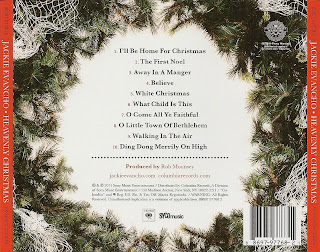 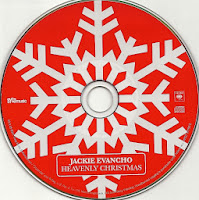 "I truly hope you have a magical Christmas... Merry Christmas everyone! Love, Jackie" 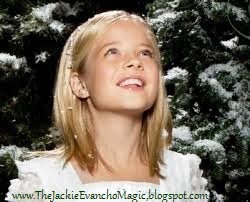 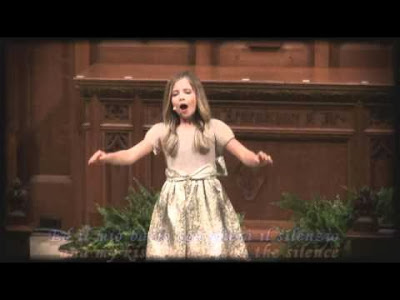 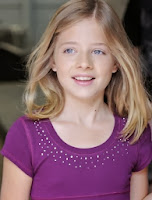 She was only 10 years old when this recording was done. Unbelievable.

When You Wish Upon a Star 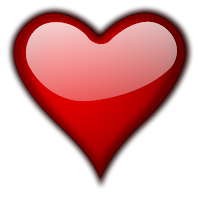 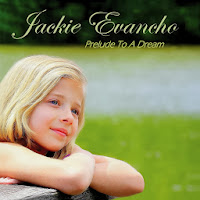 Jackie's Very 1st CD ~ Before AGT
Prelude to a Dream 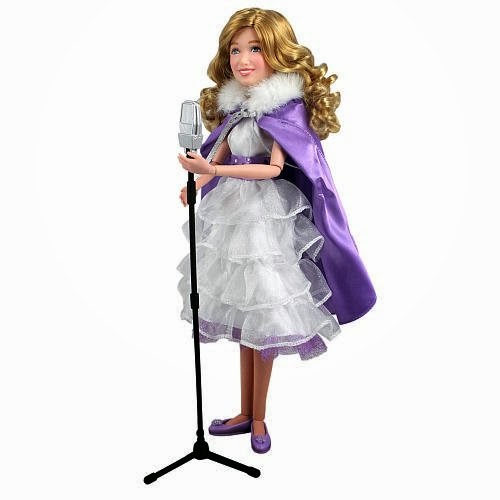 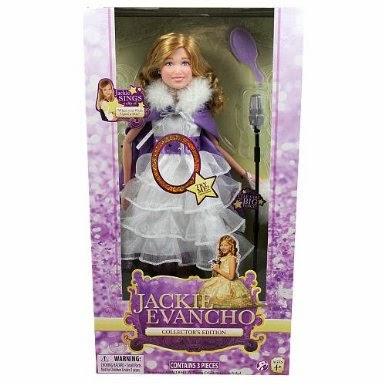 Posted by Unknown at 6:25 AM No comments:

The Jackie Evancho Dilemma....to Tilt or Not to Tilt, THAT is the Question

In a recent comment on an Amazon customer forum, TheKinginblack, who works in otolaryngology, provided interesting information about why Jackie Evancho sometimes tilts her head (apparently to the right). The following is a paraphrase.

The human throat is a tube. When you take a tube and twist it, the pathway through the tube is constricted. That’s what happens when a singer tilts her head.
Twisting the throat smooths the muscles around the trachea and constricts the airflow. That creates a whistling chamber, which makes it easier for the singer to hit high notes by creating lower volume and higher velocity.
Jackie both twists and tilts her head when she sings high notes. She does so as physical compensation, most likely automatic.
Natural development has caused Jackie’s vocal folds to lengthen and the amount of blood in them to increase. The result is that higher notes require greater support. However, because Jackie is still small and growing, her supporting cast (the core muscle groups) have yet to catch up. 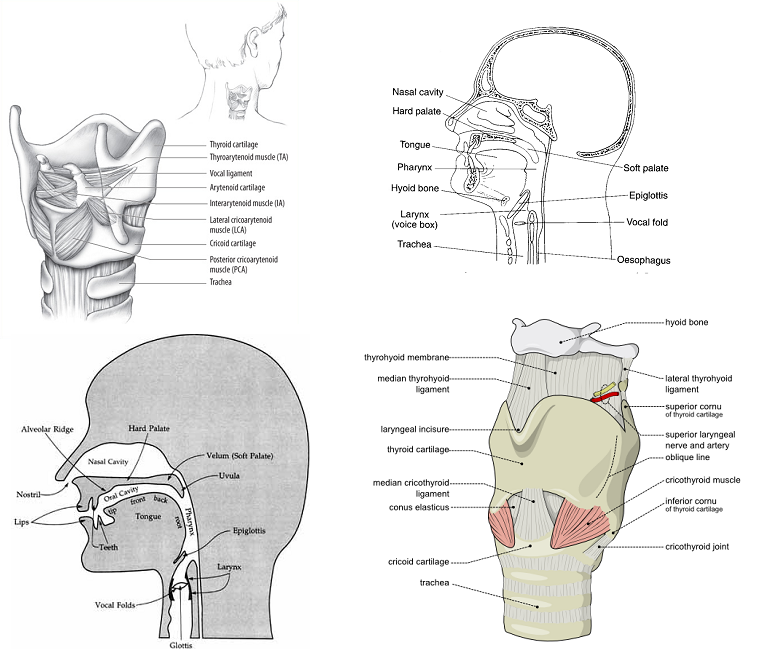 The head tilt is a temporary fix, not a permanent solution. As she grows and trains her support will improve and the head tilt should go away. The only concern, TheKinginblack states, is that the head tilt places more work on the vocal folds and the delicate muscles of the trachea and less work on the support, which are much more robust muscle groups. That is something to be mindful of, but in Jackie’s case, it’s not something to be overly worried about.
TheKinginblack recommends that (if it is not already being done) Jackie’s coach should emphasize support strengthening, which can be accomplished through exercises and regular practice.
Pilates can help, as can push-ups and core work, such as planks, leg lifts, and crunches. Healthy protein intake is also recommended. “Jackie is essentially an athlete of the voice”. As with any other athlete, extra protein intake will help build and strengthen her muscles.
TheKinginblack mentioned Maria Carey as a well-known example (she is one among many) of a singer who made a mess of her voice. By pushing her voice to and beyond its limits, over a period of time her vocal folds began to bleed, to lose elasticity, and to form vocal nodules.
Jackie has not come close to abusing her voice the way Carey or Adele or any number of rock singers have.
TheKinginblack concludes that maintaining her regular visits to an otolaryngologist, keeping her schedule light, and singing gentle songs (no more Nessun Dorma) should be more than adequate to maintain a healthy instrument.
Post courtesy of thebestofjackieontheweb.com
***********************************************************************************************************************************************************
TheJackieEvanchoMagic says........
My personal opinion? I think Jackie does the head-tilt/-twist thing simply because that's how she expresses the emotions of the music she feels when she sings, the same way she waves her arms, punches with her fists and gesticulates with her hands, and not because of any intentional technical manipulations of her physical equipment to help her voice along. I don't think her voice needed/needs any help! It is magnificent without trying to be.
With due respect for the credentials and years of study of the otolaryngologist, I think these days, everyone wants to be the expert on all things Jackie, and generalisation is rife. Everyone wants to claim to have the expert low-down on Jackie's talent. Annoying.
Afterall she is an individual and not to be lumped in constantly with and compared to all kinds of other singers out there. Most of whom are mature adults, well-seasoned in their craft with years of technical training and struggles behind them, to even get close to Jackie's abilities. She charmingly & effortlessly blows them all away anyway when she opens her mouth and lets her talent play. With or without expert otolaryngologists learned opinions.
While the info may be interesting, ......who cares? We just love to hear her extraordinary gift and are grateful that she has been given an opportunity to share it with us. All the experts.....take a break already and let the girl enjoy her passion. Like she did before all y'all came along! She was always so joyous & carefree then. Don't ruin her happiness now with all this (albeit well-meaning) 'expert advice.' I think Jackie knows her own abilities best. Her head-tilting seems to have more to do with her personality than technical singing practices. She tilts her head many times during interviews/chats/clowning around when she giggles, laughs, gets bashful, cute, funny or just affectionate with her family members, fans & friends. It's a Jackie-thing!
In reality Jackie is just a (still) very young girl who adores singing and does so from her heart & soul, as she always has done and will hopefully continue to do for a long time to come - head tilt or no head tilt. What do you think? 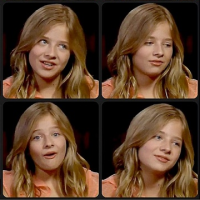 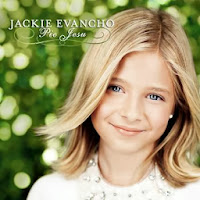 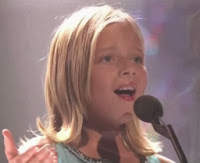 Jackie hitting that incredible high note - what? no head tilt?!

Jackie.  Just being Jackie.
http://www.TheJackieEvanchoMagic.blogspot.com
Posted by Unknown at 10:38 AM No comments:

In this recording, one can hear how a now 13 year old Jackie's voice is maturing. It is a more mature sounding Jackie beautifully performing 'O Holy Night' with Vittorio Grigolo, just in time for Christmas. I wonder if a new CD is on the cards for release just before Christmas? Wouldn't that make a wonderful Christmas gift for all her fans? I know I would love to find it in MY Christmas stocking! :)) Listening to Jackie singing Christmas songs whilst decorating the Christmas tree, whilst cooking the Christmas dinner, whilst wrapping gifts, etc.... Heaven! Jackie is growing up so fast, and I am looking forward to seeing what she will be sharing with us all in future.


Jackie with Vittorio Grigolo a year or 2 ago 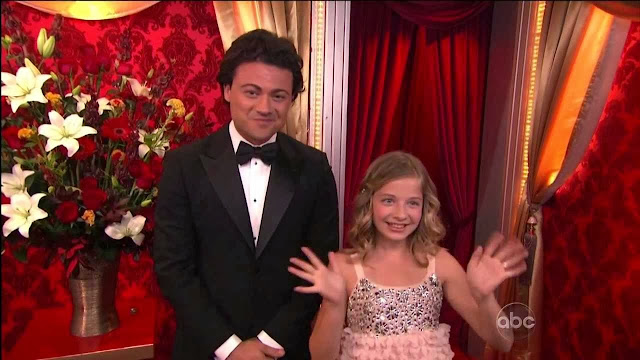 Post By http://www.TheJackieEvanchoMagic.blogspot.com
Posted by Unknown at 8:45 AM No comments: 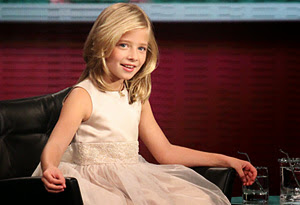 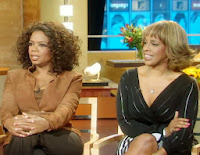 I just love this 2011 interview Jackie has here with Gayle King, Oprah's best friend of many years. In this interview, Jackie is 11 years old, a little bashful, but her usual kind, charming and diplomatic self. A pleasure to watch. What a beautiful young lady she is, both on the outside and the inside. And then of course, there's that voice.....

And then there's Jackie's performance on Oprah, where she sings (incredibly beautifully), the beautiful song, Pie Jesu 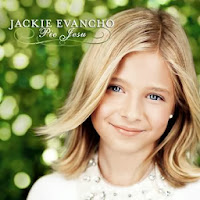 
...and the English translation...

Pie Jesu is one of the songs on Jackie's album, O Holy Night

, which was released in November 2010

http://www.TheJackieEvanchoMagic.blogspot.com
Posted by Unknown at 8:20 AM No comments:

The Many Faces of Jackie Evancho

Jackie Fans Around The World 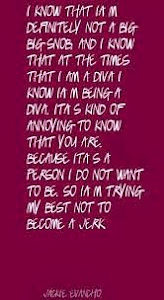 Remember when...... http://t.co/ofBoUXF4sN This is the moment my dreams came true :)